Robert Ropars: I know how busy you are so I appreciate you doing this. For this interview I looked for interesting/different questions hoping they are ones you’re not normally asked. Are you ready?

Jessica Cameron: GO FOR IT! 🙂

Robert Ropars: Ok the first question is: What is your earliest memory?

Jessica Cameron: I remember attending hearing tests in the doctor’s office, I remember the toys and thinking that they were boring and what child would ever want to play with them. It was one of the toys with the wooden loops on the metal wires that twisted which are intended for young children to learn problem solving and hand/eye coordination. I was 3.

I was born prematurely with very little hearing in one ear and virtually none in the other. It took them a few years before then felt I was safe to operate on; I had to have the tubes in my ears corrected. I hated the tests; I had taught myself how to read people’s lips and was able to mimic words around 4. This would cause me to mispronounce certain words and as a result make my spelling skills very poor, something I am still not very good at today.

Robert Ropars: What do you do to relax? Any specific hobbies or activities you like to do that would surprise your fans?

Jessica Cameron: I love urban exploring! Which is when you explore an abandoned location. I have found some wonderful places and even an abandoned resort in Mexico that is nowhere online. Its always interesting to me when you find a place that people left and you see what they took and what they left behind. Also Mother Nature is gorgeous and when you see her reclaiming land and space, it’s quite thought provoking and breath taking.

Robert Ropars: If tomorrow were your last day, what would be the first thing you would do?

Jessica Cameron: Make sure my film TRUTH OR DARE was uploaded on a platform for the world to see.

Jessica Cameron: I LOVE telling stories and making the audience feel whatever I want depending on character/story/arc/etc. It’s a very creative process that allows me to pull from deep within myself, and it’s hard for me to do which makes me want to do it more.

The WORST part for me are the people that kiss your ass to your face, then talk behind your back as soon as you turn around. I have always been a “tell it how it is” kinda girl so this is something that really bothers me. To my core. I don’t have time in my life for such people and there are far too many of them.

Robert Ropars: Why do you think you’ve succeeded in an industry where so many others, particularly women, haven’t?

Jessica Cameron: It’s my work ethic that has enabled me to succeed. I work longer hours, every day then most people can ever even imagine. The entertainment industry is filled with a bunch of people who are in it for the wrong reasons (to make lots of money, become famous, etc.) and those types of people typically don’t want to put in the work or the hours.

I don’t think either sex succeeds less; there are just fewer women involved at all levels in behind the camera stuff.

Robert Ropars: To date, what has been your most challenging role in a film, on any level (physically, mentally, acting, etc.)?

Jessica Cameron: Starring in Truth or Dare while directing it was a nightmare. Directing and acting both directly conflict with each other as far as focusing on each job’s priority, focus, etc.

As an actor you are working through your lines and making sure that your character achieves everything she needs to in each scene, finding the realism and truth that connects you to the character (at least for me).

As a Director you have to pay attention to all the characters, the overall beats of the scene (which may not be the same as the beats for each character), how the actors are working together, if all the notes are being hit, and the list continues. Also it made the hours long even for me. I didn’t sleep more then 3 hours any night and it was constant GO, GO, GO for 21 hours each day.

Robert Ropars: If you could direct the re-make of a classic horror film, what film would that be and why?

Jessica Cameron: I would LOVE to remake Salò, or the 120 Days of Sodom. I would make it WAY MORE graphic and vicious. I would also make it from either the captor’s POV or the victim’s. Probably the captor’s since I think this would be a more interesting film. It would make TRUTH OR DARE look tame by comparison.

I REALLY want to remake it!

Robert Ropars: How much do you draw upon yourself when creating a character? The character you portray in your multiple award-winning film Truth or Dare for example Jennifer Collins.

Jessica Cameron: It honestly depends on the character. For Jennifer in Truth or Dare we have some similar traits, we are both very organized and rational. So I used those elements. She is MUCH more conservative then I and secretive, where I tend to be more of an open book. So for those elements I drew from others I know who possess those traits. Her upbringing was challenging in far different ways then mine, so I really worked on those details since they are what made her the woman she is today.

It’s a long process to really craft a complete character, but so worthwhile in the end.

Robert Ropars: Is there an actor/actress present, or past, you most want to work with? Why?

Jessica Cameron: I would love to work with the original scream queen, Jamie Lee Curtis. I adore her work; she is such a strong actress. I have a great deal of respect for her and all women who have managed to maintain strong careers consistently throughout several decades. Her ability to seamlessly jump from different genres is an inspiration to all actresses. I also happen to think she is one of the most intelligent people on the planet, if you have ever heard her speak (in an interview, at a convention, etc.) then you know this.

Robert Ropars: As my readers are reading this interview; you’re about to embark on what surely must be one of the most ambitious film projects in memory. What can you share about your plans for a road trip to film three movies at the same time? I was particularly impressed with the originality in using crowd funding to reward contributors by giving them “pins” on a map of the U.S. The more the contributions, the more pins a state earned. I understand you’ve recently announced the winning states and the detailed road map is coming soon? 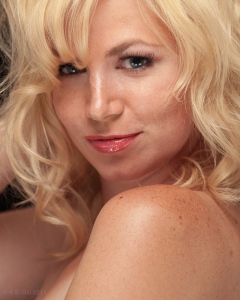 Jessica Cameron: We have announced the winning states and they are California, New Mexico. Arizona, Ohio, Alabama, and Texas. I am excited though quite nervous as well since it’s a lot of work to location scout from far away. The fans have been really great in helping us 🙂 We will be posting the detailed map soon, showing exactly where we will be traveling, stay tuned to the website for more details: www.killtheproductionassistant.com

We really want to bring the films TO the fans, cause as a horror fan I love seeing how the films are made. It’s going to be an insane amount of work – after all making one film in 3 weeks is hard, 3 is kinda insane. But I cannot think of a better way to spend 3 weeks, then with your favorite people, traveling across the country making movies. It’s going to be an incredible experience.