I know I normally write about fictional horror, but this is a blog post about 9/11: the worst kind of real horror. No, I do not have tin foil on my head, nor do I accept every conspiracy theory that arises. While I do believe in questioning and keeping an open mind, it’s critical to look for facts and try to explain things. The events of 9/11 are seared in our consciousness much like the JFK/RFK/MLK assassinations and Pearl Harbor before it.

I simply want to ask some questions that may help move the conversation forward by connecting a lot of disparate dots to hopefully create a logical, grounded explanation for others to investigate.

It was clear that 9/11 saw a series almost unbelievable events including the first and only examples of buildings collapsing due to either a airliner strike or fire (WTC 7 details). It just doesn’t happen, but it clearly did even though the World Trade Center buildings were designed to withstand being struck by a Boeing 707.

The fires burned so hot as to melt steel which is bizarre as steel’s melting point should have been far above the heat level of either the jet fuel or the office fires caused by the explosions and jet fuel fires. Steel melts in the 2500 to 2800 Fahrenheit range while jet fuel would burn in the 680 Fahrenheit range.

This has led to many conspiracy theories that the buildings were rigged with explosives, specifically thermite (Source) to bring the buildings down. This was allegedly done, so the theories state, to cause maximum death/devastation to ensure the public supported war and to hide government secrets in the buildings (WTC 7 occupants) or some other nefarious reason.

The real question is, would the US government have allowed this to happen to justify global warfare and the Patriot Act (which was sitting covered in dust waiting to be put in place and passed with almost no Congressional review and likely based on elements of the Vietnam-era Phoenix Program)? The same questions have been asked about Pearl Harbor asserting that FDR was SO desperate to get the American people behind war that he let the attack occur knowing it would rally the country. 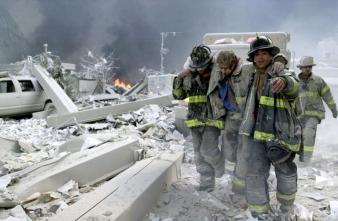 I have no love for the Bush Administration, but I don’t believe any of them were evil enough to have let it happen. I do believe they used it to justify their evil wars and installing the Patriot Act was their way of making lemonade from lemons.

It’s become clear that some part of the Saudi Arabian government and/or royal family contributed money and other assistance to the 9/11 hijackers (Details). But is there also a “chemtrails” connection here?

For clarity, as opposed to “contrails” (normal emission of water vapor from jet engines at high altitude which condenses into a visible cloud when the hot humid air mixes with surrounding air, “chemtrails” is the name given to deliberately created “contrails” saturated with chemicals to disperse in the air for some as yet unknown reason/motive.

The contrails phenomenon actually  dates back to D-Day in World War 2. A noticeable drop in temperature occurred as 1000s of US planes flew south over England towards France creating a tangle of contrails in the skies above (Details and more details.).

The resulting realization that high-altitude flights caused contrails AND altered the weather and likely is the start of the US government’s interest in using them. Whether as a method for altering weather or potentially dispersal of substances for “geo-engineering” or other population-altering objectives is hotly debated.

There are nearly as many conspiracy theories around “chemtrails” as there are around 9/11. Many believe the government is dispersing substances from military and passenger jets as part of weather alteration and potentially other objectives (geo-engineering). We have also seen multiple discussions about what they are, what they are made of and potential impact, here are some links to review for reference:

But why, you  may ask, am I talking about “chemtrails” in context of 9/11? What if they are the missing piece of this puzzle?

> What would happen if the chemicals commonly being detected as being part of “chemtrails” (including Barium, aluminum and other metals) were exposed to a massive explosion of burning jet fuel within the confines of a building?
> Could these chemicals, if so ignited, create a thermal reaction that in the end looks and acts like thermite (a “pyrotechnic composition of metal powder fuel and metal oxide.” Generally not explosive, but designed to create high temperature in a small area. A common thermite fuel is aluminum.)
> Were the planes selected on 9/11 chosen because of the chemtrail chemicals on board? (Both the fuel and the chemtrails would be at their highest capacity early in a flight.)
> Did someone like the Saudis, assist the 9/11 hijackers after learning of the US use chemtrails in passenger jets?
> If “chemtrails” chemicals did cause a thermite-like reaction, was it perhaps unintentional and merely a horrible accidental collateral effect of the plane crashes?
> Was the US government’s subsequent coverup of 9/11 facts done mainly to hide the US chemtrail program and/or Saudi collusion as they are a long-standing friend of the Bush family and our “partner” in the “War on Terror.” 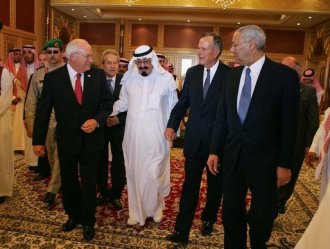 Even now, the CIA is trying to keep the infamous 28 pages of the 9/11 Commission report classified (details) which allegedly implicate Saudi Arabia in 9/11. Does it also touch on the plan to use “chemtrail”-filled planes which would expose the government’s use of them and geo-engineering? Or are they just full of combined FBI threads that CIA Director Brennan claims are full of mistakes and inaccuracy? How about we taxpayers get full disclosure and decide for ourselves?

It’s just a theory, but what if the US government is using “chemtrails” for whatever reason and someone discovered that and wanted to use this scenario to create a thermite-like event using an exploding plane with a nearly full fuel tank in a building?

This might explain a lot of the mystery and the events we witnessed that otherwise just don’t make sense. Things such as buildings collapsing the WTC buildings did and literally vaporizing/pulverizing. When buildings collapse in any other example, bodies are generally found in the debris, but in this case the building and people were essentially disintegrated which is bizarre and unprecedented. Watch this short video that asks where the bodies went – it’s eye-opening.

Again – I’m just a regular guy trying to come up with a logical, scientific, albeit layman’s, theory for what happened on 9/11. I hope someone with the means to dig into it will be able to really dig into and maybe one day we’ll know the truth.