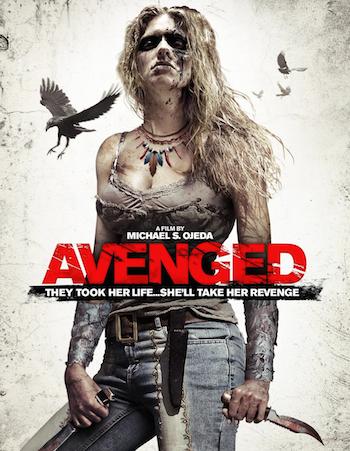 I had the great pleasure to see ‘Avenged’ on Amazon Instant Video (love Video on Demand for finding indie horror and sci-fi treats). And I can say unreservedly that I can’t wait to see it again AND own it once it’s available to purchase.

Written, directed, edited and cinematograph’d (I know that’s not a real word but go with it) by Michael S. Ojeda, this film is a gritty, “Redsploitation”/grindhouse, rape revenge film that moves quickly into horror film territory. The rape/revenge genre is larger than most people probably would imagine, and a frequent film trope whether full on horror film or not (examples including “Straw Dogs,” “Lady Snowblood,” “I Spit on Your Grave,” “The Crow,” “The Last House on the Left,” “Ms. 45” “Baise Moi” “Irréversible,” “The Girl with the Dragon Tattoo” trilogy, etc.).

I would, of course, argue that rape is true horror so any film focused on that could qualify as a horror film. But I digress (see this list for more on IMDB)

This film, originally titled “Savaged” when shown on the festival circuit in 2013 is newly christened and out for blood – much like the star of the film. Featuring a lot of references to atrocities committed against native peoples (past and present), the film also features a twist having a deaf/mute heroine (reminding me slightly of the mute heroine in “Ms. 45”).

This character is played with an intense ferocity belying her sweet girl-next-door appearance. Her transformation over the course of this film is nothing short of stunning. The devastation wrought on her body actually reminded me of Arnold Schwarzenegger’s T-800 during “Terminator 2: Judgment Day.”

I CANNOT emphasize enough how amazing Amanda Adrienne’s performance is through what must have been a rough production (physically and emotionally). Her “Zoe” joins the ranks, in my mind, of Jenny Spain (as the eponymous “Deadgirl”) and Uma Thurman (as “The Bride” in “Kill Bill”) fully embracing the raped/abused/killed woman on a revenge rampage. 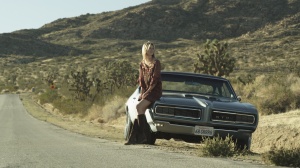 It starts out simple/sweet enough showing us just enough background detail to get things moving. Zoe is dating nice guy Dane long distance (a solid performance by Marc Anthony Samuel), and is going to drive across the southwest to move in with him. Left a Ford Mustang GT by her father, she rockets through a beautifully shot, but lonely southwest with, as her mother predicted, few people on the same path. As a precaution, she takes a photo each hour and texts it to him. Sometimes, while driving which leads her into the horror.

This film should be a PSA for high school students about texting and driving!

Barring one slightly out-of-place special effect shot used to convey Zoe passing the Grand Canyon (ahem), this film is shot and edited with great skill. It is really fantastic considering this was an indie, low budget shoot and a testament to the crew in general and Ojeda in particular. Having seen as many indie horror films as I have, the difference between quality can be astronomical. This film, however, stands out from start to finish from writing to acting to directing to cinematography to music score to editing.

I don’t want to spoil anything, the trailer clearly gives you much of the story, but broadly speaking it follows the rape/revenge sub-genre’s standard story arc. And that’s not a bad thing. I LOVE a revenge film where the wronged perseveres and overcomes obstacles to wreak havoc on tormentors. I don’t like the dread/nihilism/defeatist plots that have crept into many films (“The Strangers” and “Oldboy” being perfect examples).

I want to go on an emotional journey and root for a solid main character, in particular a woman and watch them (her) kick ass. For me “Kill Bill” will be the gold standard for this and right/wrong I tend to gauge films against that. On a lower budget scale, films like “Sushi Girl” (my review) and “Avenged” fulfill this need in spades.

In lesser competent hands than Ojeda, lower quality production, lead stars who weren’t up to the considerable challenges presented and this would have been one of the 1000s of low budget, indies showing at numerous film festivals and on VOD. You see them and try to ignore low quality work, however earnest, and wish more budget and skill had been involved. This skilled team, however, rose to the challenge and created a paranormal “Kill Bill” meets “Deadgirl” in the end. 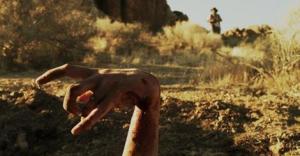 After she’s gang raped (mercifully shown only in its initial phase), beaten and then killed and buried, Zoe should have been desert vermin fodder. Found by a native with spiritual powers, she’s brought back to life (maybe she was just “mostly dead”) by him, however she had wandered enough and seen/heard enough of the rednecks’ backstory (which I won’t go into as it would spoil much of the storyline) to summon the wandering and VERY pissed off spirit of an Apache general.

Through great practical F/X, with occasional use of more CG-ish, but low key, F/X, we see Zoe return to try and recover her love and seek her revenge. However, this zombie warrior is on borrowed time, rotting away. Essentially unkillable (hey she’s already dead), though her body’s damage increases with each encounter, Zoe has amazing strength and arms herself with bow and arrow, tomahawk and knife. 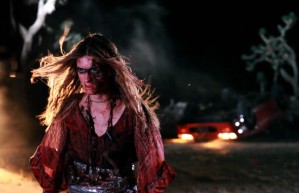 One could argue that the redneck crew was made so reprehensible, and with little fleshing out, that you can’t help but want to see them suffer. But that’s the point of this sub-genre. We have a victim we care about, they’re hurt and suffer terribly at the hands of true bastards, and they must recover, grow stronger and seek vengeance.

I absolutely enjoyed this film and hope it sees the success it deserves. It should find a great reception in the horror community and while it features some extreme gore and horror, in many ways it does seems like they restrained from going too far.

And that’s not a bad thing. Several of the scenes are pretty intense and long lasting, however it moves along at a fast pace once the mayhem starts and doesn’t draw out most scenes to the point where you’d be reaching for a vomit bag (unlike say Jessica Cameron’s “Truth or Dare” which I reviewed previously here).

In the case of Ms. Cameron’s film, the extreme horror/gore was intentional and suited the story perfectly. Here, any more I think would have distracted from the story and the film’s energy/vibe (if that makes sense). Here the focus is rightly on Zoe and that’s 100% where it needs to be.

In fact, to be honest looking for dings, I thought I found a goof/continuity error in a late scene where Zoe is diving under a car flying through the air. It was something I noticed when I watched the trailer, one of her legs is cut short under the knee. So, I assumed, that either that was due to a change in storyline direction whereby she originally was losing body parts as she went along (but needing to keep the only shot with her diving like that), or something went amiss creating the f/x shot.

So if you’re a fan of horror, grindhouse, and/or revenge films with leading ladies who kick ass… “Avenged” is the film you need to rent right now! 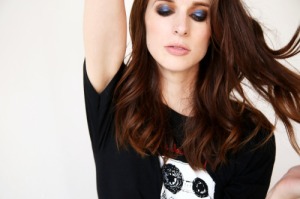 And again – Amanda Adrienne has a new fan who is eager to see what she does next.

In fact, if I had to criticize anything about the movie, it’s that it was rental only on Amazon Instant Video so I have to wait to own it…

Watch the movie on Amazon

Watch the movie on iTunes

One thought on “Horror film review: A PSA on texting and driving… “Avenged” by Michael Ojeda – OWN”